Moultrie A900 and their horrifically poor advertising and instructions. 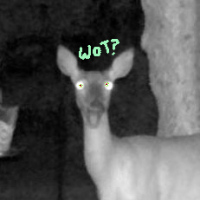 Moultrie rant time.
I received the a900 the other day and put it up tonight outside. I would have never ordered this thing had moultrie been straight up on their website about the total lameness this a900 is. NONE of the fails could I have known about until I opened the shipping box and seen the actual packaging and crap on the back.
First - Nowhere on the a900 specs and details ON THE MOULTRIE website itself is any meaningful information, nor 10 other resellers, as all they did was copy paste moultrie's website useless details. Maybe this camera is fine for someone who has no clue what a camera is, because that's exactly what this excuse is designed for. Someone who doesn't care and just wants to turn something on.

At this point the selling point of 30meg, which by the way is only available on ONE setting for a single shot I believe, but haven't proven this yet, since Moultrie is mum on most things is actually lower for almost all other settings is beyond moot.

Is Moultrie advertising this way on purpose? To hide what it doesn't have by not actually putting out any information of functions and certain specs. Sadly, there are numerous chinese manufacturers that all make the same models from different resellers like Moultrie.

So what I bought was a weakly designed, bare minimum box with leds that only uses a data spec card from 2013 at almost the lowest density and volume with programming that is like windows95 code compared to the 45 buck camera that I bought last year running like win10 OS, programmable run times, unlimited video at 3 resolutions, stills at 4K, variable capture sequences and other things a900 doesn't have EXCEPT it has only 12meg optical, and three less led's than thee a900 so the images weren't the best. I don't need no phone data abilities. I'm sure that's handy for many, but not a selling point to me.

I liked the images people put on this forum and the a900 seemed almost the highest for the money.
However now I found out why it was at that price point. And if Moultrie had bothered to put actual useful information on the product ads and website, not some pablum as if they believed we are all idiots buying their products. I may have bought a higher end Moultrie. But then again, they didn't give me anything to go on to walk me up the price ladder.

I am an idiot for assuming, but I certainly had no choice. I would've been fired had I made this decision when I was working. Their rules were if not enough info to make a informed decision, move on to the next thing instead.

I'm sure the image quality will be fine, and maybe someone somewhere can come back here and show me that I'm wrong. I wish I was, but don't think so. And if people can't tell, I'm not using it for hunting.
But that shouldn't have made any difference.

Stay safe and take care. We're not out of the coronavirus woods quite yet.